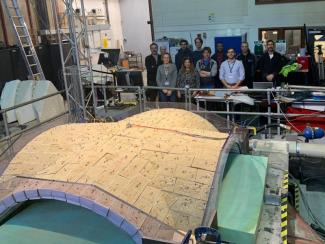 The work at hand presents an experimental study of the dynamic and earthquake response of a groin vault carried out on the EQUALS shaking table, University of Bristol, under the auspices of SERA/H2020 project. The vault considers dry joints between the voussoirs (like many monumental structures in South Mediterranean) and was built in an innovative way to allow study of its dynamic behaviour and repetition of tests carried out until collapse. To the best of the authors’ knowledge, no investigations of this kind have been carried out in the past.

The physical model was generated by the intersection of two circular barrel vaults, without ribs but with especially shaped blocks along the groins. Each block was manufactured with a 3D printed skin and filled with mortar to supply mass. The skin was made with a plastic material to provide the blocks with sufficient stiffness and strength to sustain impact without damage and allow for a quick and reliable re-assembly.

The vault was tested on the 3m x 3m, 6-dof shaking table at the University of Bristol, U.K.. Harmonic and transient earthquake motions were imposed in one horizontal direction with increasing amplitude, up to collapse.

Preliminary results showed that low frequencies (around 2Hz and 5 Hz at model scale) are critical. It was noticed that the barrel vault perpendicular to the motion deflected significantly around the key-stone line, eventually leading to collapse.